This coming weekend (October 2017) sees the last days of legality in the UK for the round one-pound coin. Those of us who still haven’t recovered from our pounds disappearing as notes, this seems like dizzyingly rapid change. After all, it was only in 1983 that the round pound arrived, replacing those green pieces of paper.

The old coin goes out of circulation as the shiny new 12-sided bimetallic version takes over. Although you’ll no longer be able to spend a round pound in most retail establishments after Sunday (a few are taking a more relaxed view of the deadline), a few canny shoppers are hanging on to at least one of the things.

How else are we going to free up our trolleys in Tesco and Sainsbury’s? Some branches of the supermarkets aren’t yet ready for the 12-sided interloper.

Also, train companies have admitted some ticket machines still don’t accept the 12-sided coin. After all, it’s only been six months since the new version became legally usable and caused chaos in the world of vending machines.

Neatly avoiding any fiduciary transition woes, the lockers in my gym weren’t updated. They just took out the old locks and insisted on us all buying our own padlocks instead. No new fancy coin-operated equipment for us.

Still, all the fuss will surely be worth it. The new 12-sided coin is, according to the Royal Mint, “The most secure coin in the world.” It features micro-lettering, milled edges, and a latent image that looks a little like a hologram, which changes from a “£” symbol to a “1” when you tilt the coin.

The Mint says: “The round £1 coin is being replaced for the first time in over thirty years because of its vulnerability to sophisticated counterfeiters. Approximately one in thirty round £1 coins in circulation is a counterfeit.”

Good news for numismatists throughout the land!

I fear the counterfeiters are already working on the hologram technology, though. They love a little challenge. 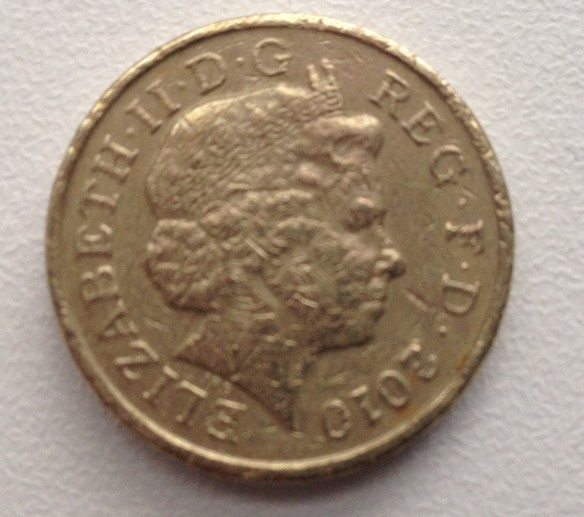 Is the Queen not impressed that supermarkets aren’t yet ready for the new coin?

4 thoughts on “The round pound”