They were with us for almost one hundred years, and now they’re disappearing: the perforated paper circle that you used to stick to the windscreen of your car as visual proof that you’d paid your road tax.

Actually, there is no such thing as road tax. The proper term for the annual tax on the ownership of road vehicles is vehicle excise duty or VED. However, very few people outside Parliament and the Driver and Vehicle Licensing Agency ever called this charge anything but road tax. This is partly because we were used to paying other forms of road tax since the Middle Ages, such as a charge to cross a bridge, and partly because the tax originally paid for the UK’s road systems: all proceeds from the tax were at the beginning ring-fenced for building and maintaining roads.

This happy state of affairs lasted until 1937 when the law was changed and the tax money went straight to the Treasury instead. Still, we persisted in calling it the road tax and the slip of paper we collected annually from the Post Office or via post was “the tax disc“.

Although road tax was introduced in the UK in 1889, it wasn’t until 1 January 1921 that you had to display a disc on your vehicle, when the charge was £1 per horsepower.

The first car tax discs were remarkably similar to the system in use until October 2014, when the discs no longer had to be displayed by law. They consisted of a circular certificate bearing the make, model and registration number of the car. First they were in black and white, then came colour in 1923. Perforations — so that you could more easily squeeze the little bugger into its circular holder — arrived in 1938. (The perforations disappeared again in 1942, possibly as a result of the war effort, and didn’t make a come-back until 1952.) (The perforations weren’t brilliant, though, as my collection of slightly tattered discs attested.) Over the years, to prevent fraud, the discs also acquired watermarking, embossing and barcodes.

And then, to prevent EVEN MORE fraud, we sent our tax discs the way of the man with the red flag. Surveillance cameras using automatic number plate recognition (ANPR) now track all cars. The aim is that the cameras will catch all those who haven’t paid up by checking number-plates against an electronic database of who has paid the road tax and who hasn’t. (Big Brother, anyone?)

Velologists — those who study and collect tax discs (no, really) — are already sensing a lucrative collectibles market.

So, don’t rip up that old disc: it could be worth something one day. 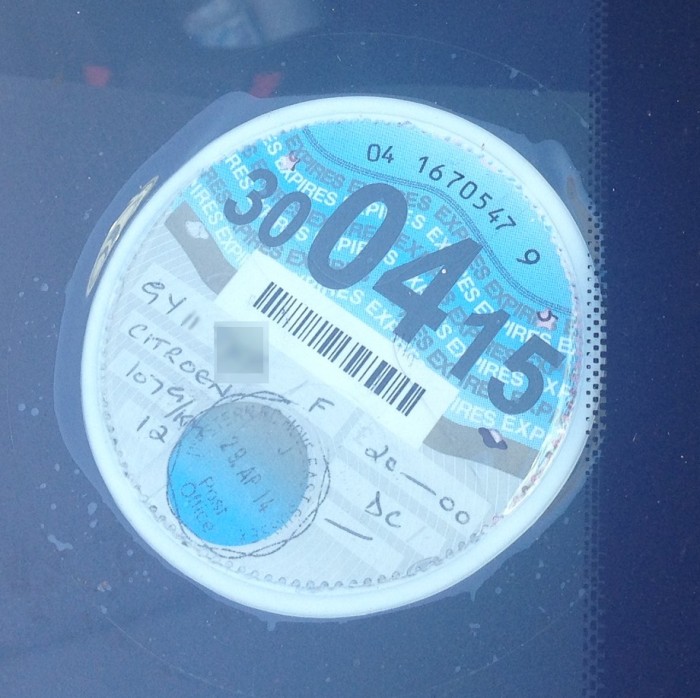